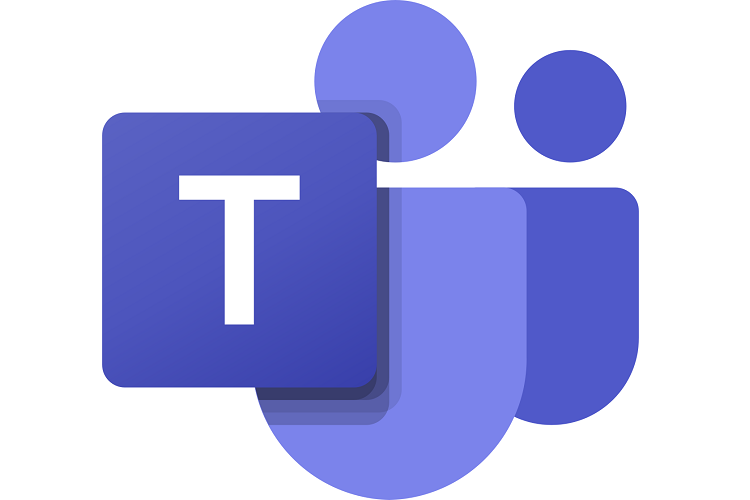 Exoprise is the only vendor that can automate, test, and proactively monitor the true experience of the Team platform. When you want to know how Microsoft Teams is performing before that important call or conference, you need Exoprise CloudReady.

Microsoft Teams relies on WebRTC and Exoprise captures low-level network characteristics without the need for SSL inspection or complex Netflow instrumentation. The Teams AV Conferencing sensor relies on a hosted media bot to proactively test and monitor low-level the UC workflow, Audio, and Video streams in real-time. Use the Teams AV sensor for accurate networking testing as recommended for deploying and assessing network capacity for Microsoft Teams according to Microsoft.

Microsoft Teams, both for regular browsers and their Teams App relies on WebRTC for audio and video communications. WebRTC is a free and open standard that provides browsers and mobile apps with the ability to perform Real-Time Communications (RTC) via simple JavaScript compatible APIs. The WebRTC project is supported by Google, Mozilla, and now with the announcement of Microsoft Edge to be based off of Chrome/Chromium, also by Microsoft.

WebRTC is responsible for the various workflows involved in establishing real-time communications between peers or to central servers. It utilizes many standards such as Session Traversal Utilities for NAT (STUN) and Traversal Using Relays around NAT (TURN) for discovering and optimizing the connections. Once network discovery is complete, WebRTC handles the required signaling and session establishment protocols such as JSEP, ICE, SIP, SDP, NAT and UDP/TCP. We help you ascertain the suitability of WebRTC in your LAN/WAN environment.

As opposed to the legacy Skype for Business protocols, WebRTC is an open standard that can more easily be supported on mobile clients or Linux desktops. Hurrah!

At the end of July, Microsoft announced that the Skype for Business Online Service will be ending on July 31, 2021 and that Microsoft is encouraging its customers to use the Microsoft Teams service instead.

The writing was on this wall for sometime. On-premises Skype for Business Server will exist for some time but Microsoft is putting its full weight behind Microsoft Teams. Thankfully, Exoprise has arrived with its Microsoft Teams monitoring solutions in the nick of time. Now, armed with a cadre of CloudReady Teams, VoIP and Skype sensors, Unified Communications administrators can properly baseline, test, and evaluate their network for Microsoft Teams performance.

Deploying and setting up an Exoprise Teams AV Conferencing Sensor is easy. Because the sensor utilizes an Azure-hosted Teams Bot to stream audio and video into a client conference call, it doesn’t require a peer-to-peer setup like the Exoprise Skype sensors. However, it does require more maintenance and infrastructure from the team at Exoprise. 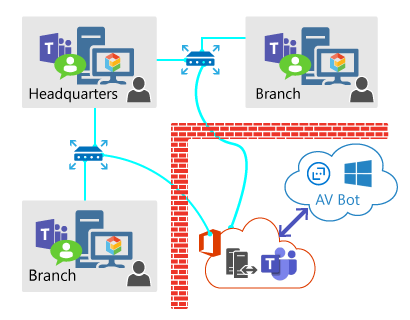 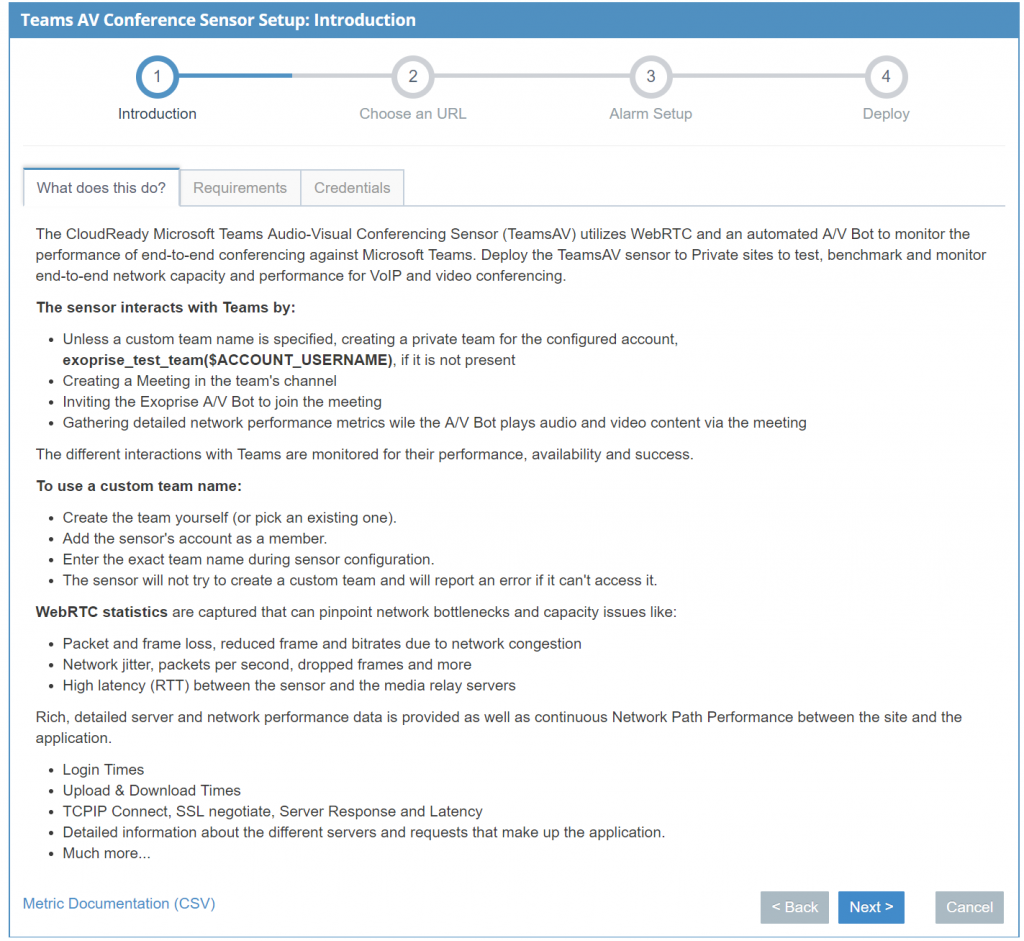 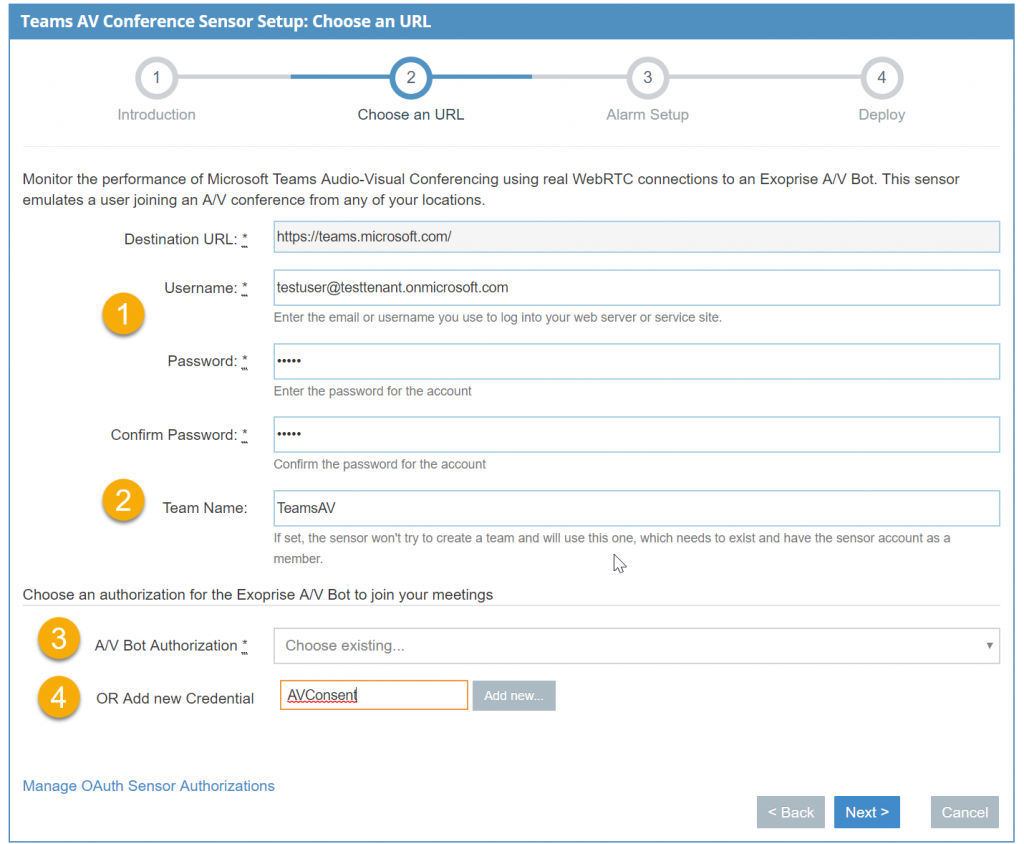 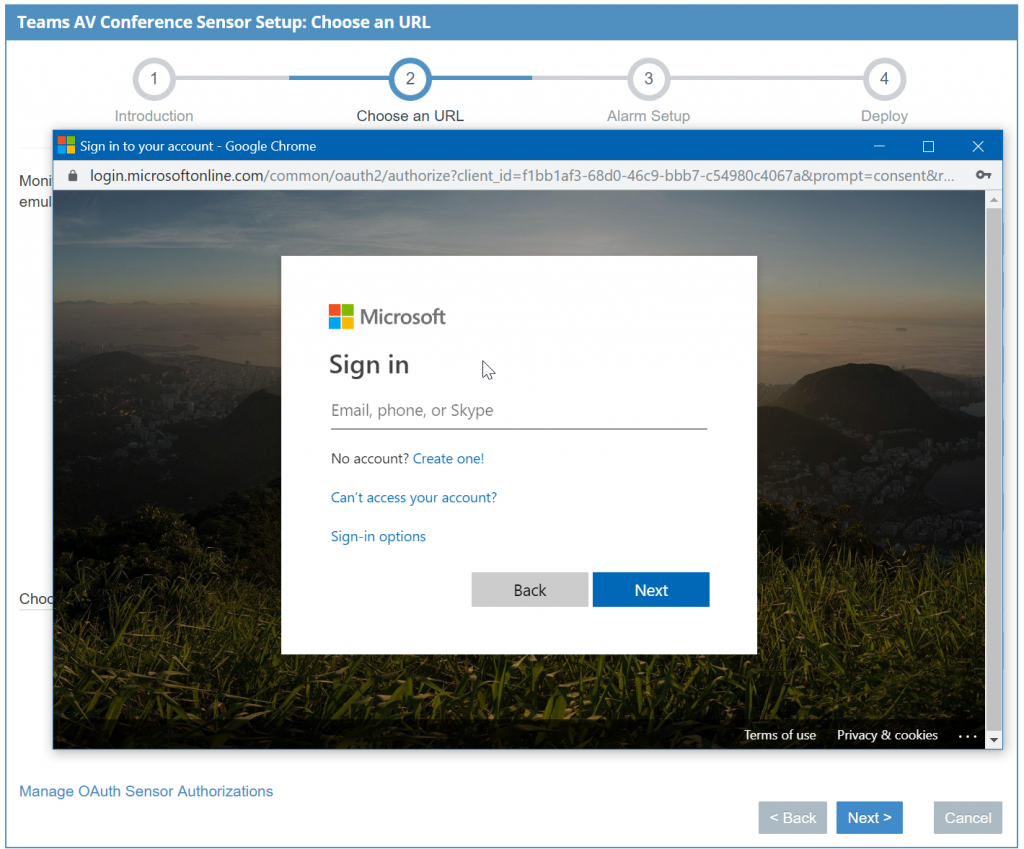 That’s it. That is all it takes to configure a Teams AV Conferencing sensor and begin monitoring end-to-end Microsoft Teams network performance. Once you proceed to the next step, your configuration will be validated and then onto deployment to a CloudReady private sites you’ve deployed.

Once you deploy a Microsoft Teams AV Sensor, it will create conference sessions (Meet Now) and invite the Exoprise AV bot to join. When the Bot joins it starts streaming audio and video content into the conference which the sensor monitors. High level actions and low-level WebRTC metrics about the session, network and performance of the audio and video content are aggregated for analysis and alarming. Below are metric details and how they are used to diagnose and baseline Microsoft Teams performance on your network:

The streaming of audio and video from the Exoprise AV bot is monitored from the WebRTC perspective and a compliment of statistics is captured:

Comparing any of these metrics to the CloudReady crowd helps you in pinpointing the problem. If the crowd metrics are exhibiting the same patterns as your own sensors, that points to a shared problem with Teams or Azure infrastructure. If the your deployed sensors are only experiencing detrimental affects then the problem is localized to your own networks or where the sensor is deployed.

Of interest for advanced telemetry in the Teams AV sensor is NACK, FIR and PLI packets. These special WebRTC transport packets are generated used in response to poor networking conditions and the detection of dropped frames or audio samples. Basically, the client sends a “reset” to the server or peer and requests that the missing bits or frames are resent or re-synchronized. If these event occurrences are sustained then you have some poor networking on your hands.

The metrics on the Meeting Connection tab cover the overall quality of the connection for the conference to the actual Microsoft Teams hosting infrastructure.

The Microsoft Teams AV Sensor includes metrics for the underlying page navigation, login, authentication, and connection times. Aggregate metrics for the underlying TCP/IP Connection and SSL Timings are also captured for each sensor run. This is an aggregate sample of everything it takes to get into a meeting within Microsoft Teams including signing in and starting a meet-now conference session.

It wouldn’t be an Exoprise blog post without the requisite set of screenshots. We believe in presenting screenshots and examples to show prospects and customers that our platform and technology are real. There’s no magical hand-waving when it comes to seeing our sensors in action. Try the new Microsoft Teams Audio Video Conferencing see what you see for yourself. 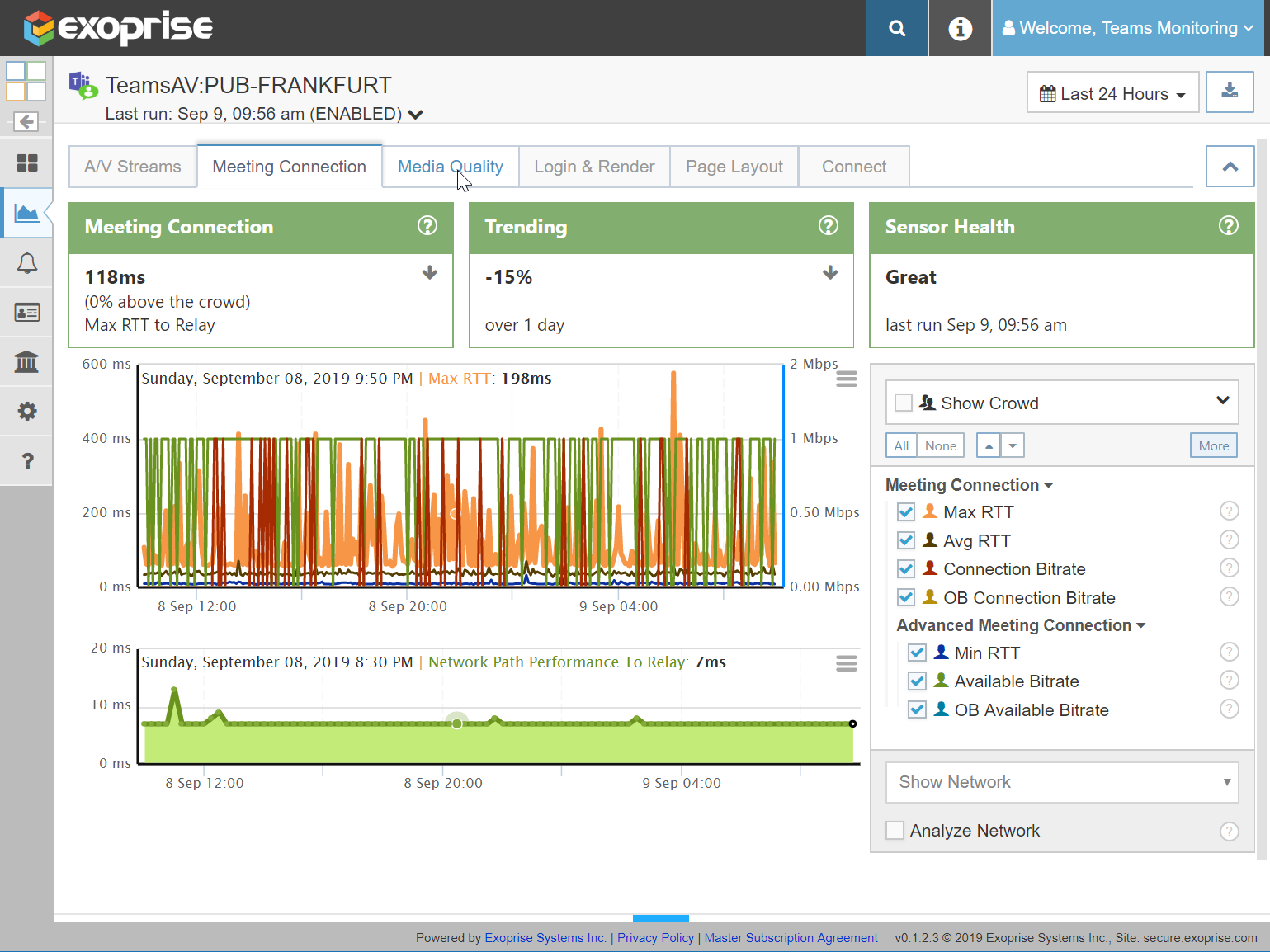 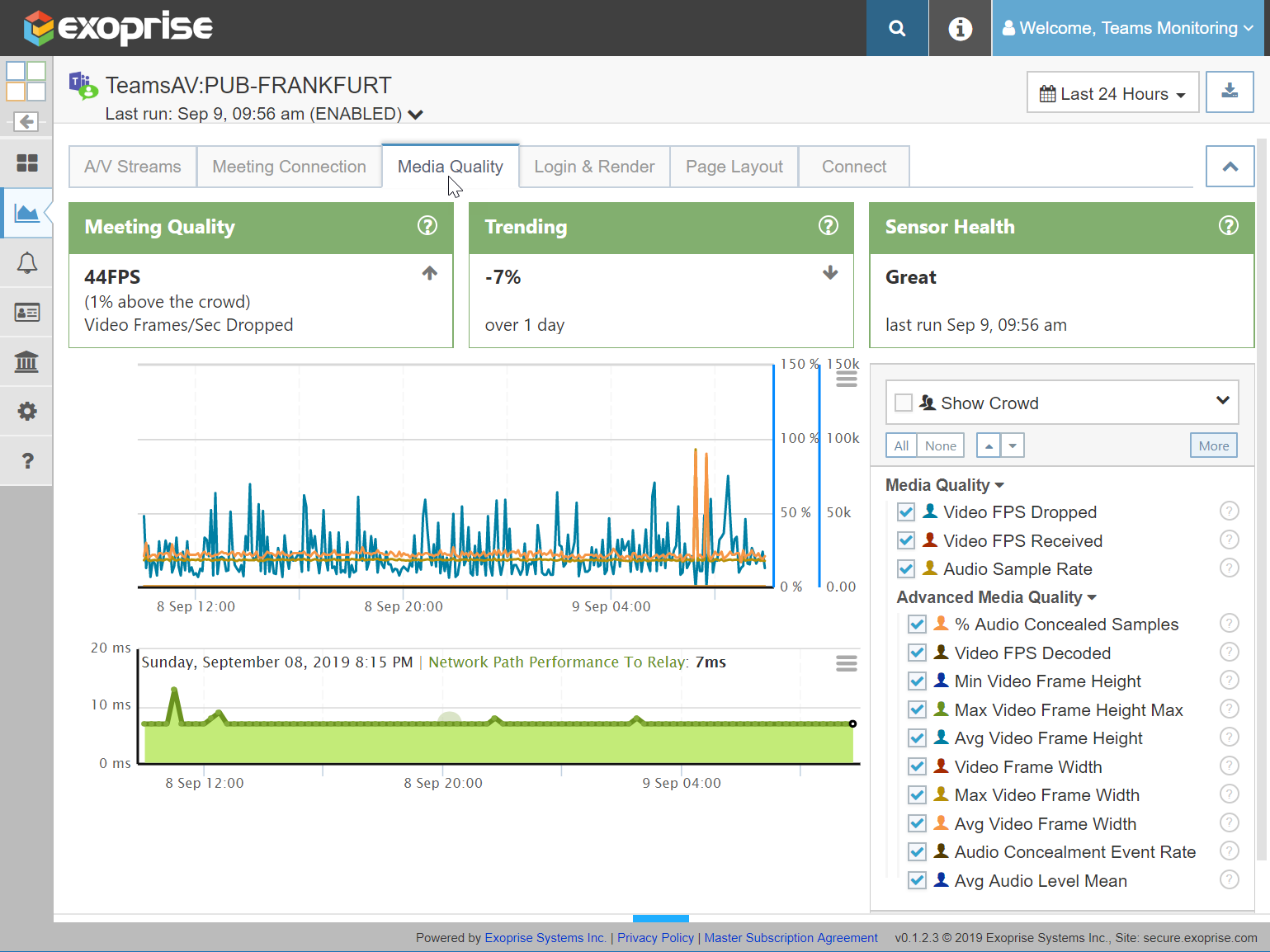 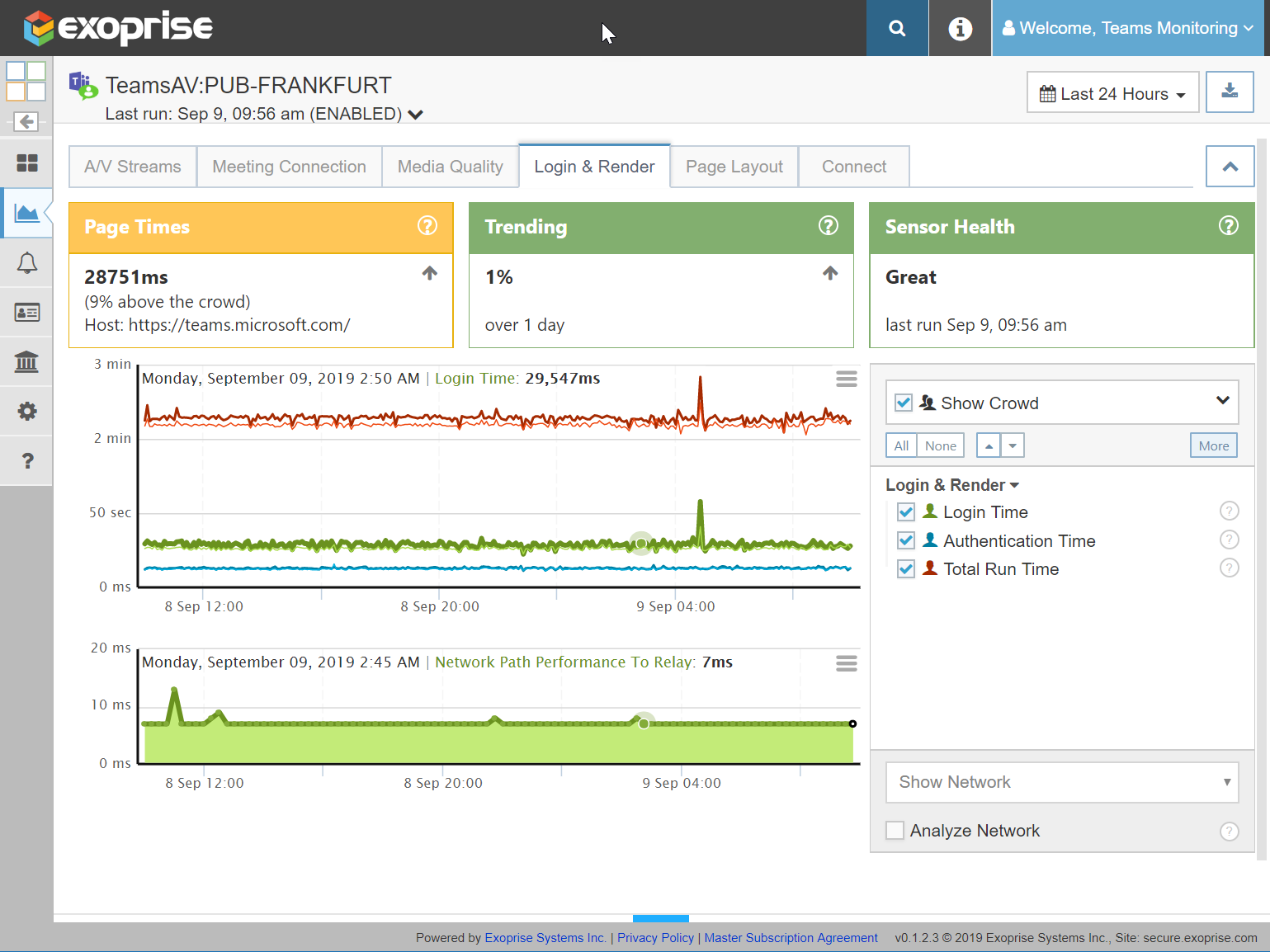 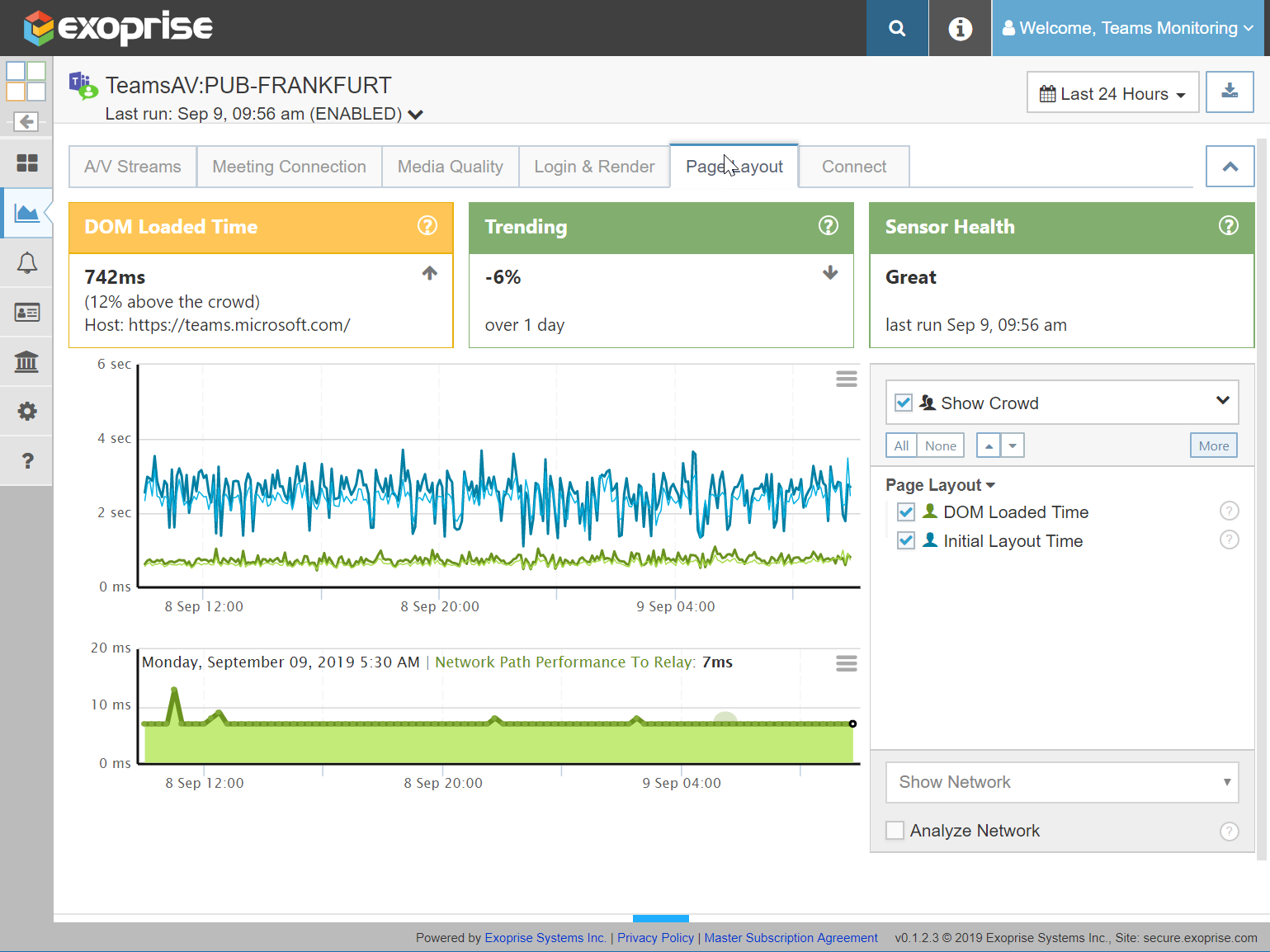 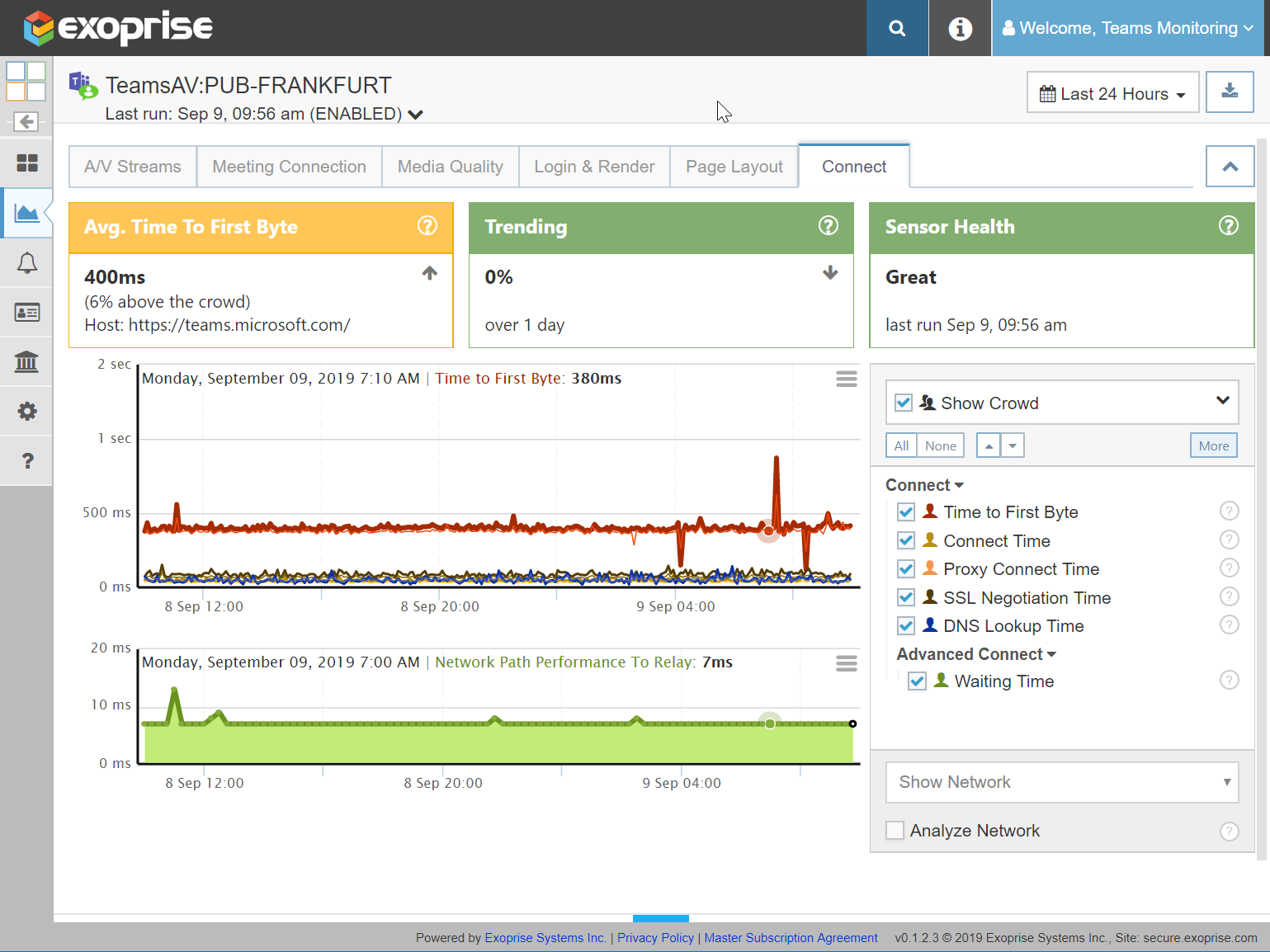 Sign up for teambuzz and we'll keep you up to date with our latest blogs and news. 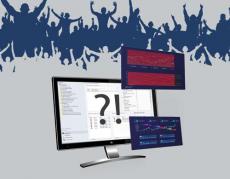 Microsoft SCOM for Office 365 Monitoring? There Is a Better Alternative.
Nov 22, 2022 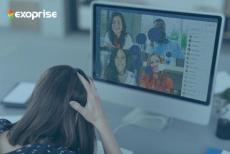 Diagnose Any Microsoft Teams Problem in 3 Clicks or Less!
Nov 9, 2022

How to Monitor Any SaaS Application Without Scripting Requirements
Jan 13, 2022